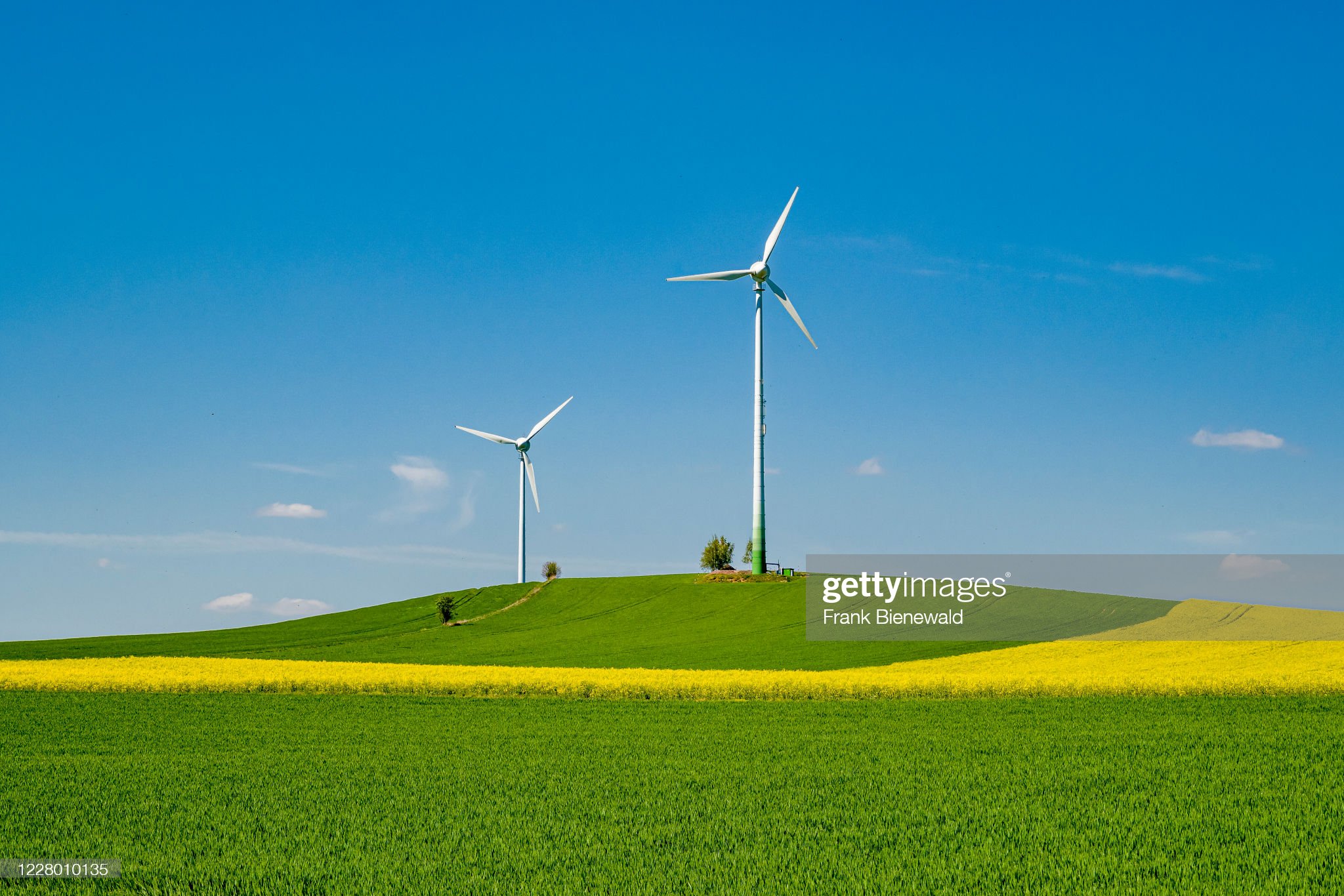 What are the pros and cons of Wind Power? We were prompted to publish this blog following the Texas snowstorm/power grid failure. If you recall, Gov. Abbott of Texas falsely claimed that wind turbines were to blame for the power grid failure. Of course, this is totally untrue. Texas primarily relies on Fossil Fuels and approx. 50% of its electricity is generated from Natural Gas and 37% from Coal, most of which is imported from Wyoming. Although Texas produces a quarter of Wind Energy production in the U.S, i is actually a very small part of the energy mix equation within Texas. Nevertheless, Abbott got us thinking. We deal with Renewable Energy all the time so we thought we would provide a quick primer on Wind Energy.

First, let’s look at the rapid growth of Wind over the last few years as it as emerged as one of the top sources of energy throughout the world.  In 2019, the global wind power market grew 19%, with just about 60 GW of new capacity added to the world’s electric grids, including over 54 GW onshore and over 6 GW offshore. This was the second largest annual increase in capacity to date. Having accounted for one-tenth of additions in 2019, offshore wind power plays an exponentially significant position in the global wind industry.  The IEA forecast assumes a further acceleration of wind additions to 68 GW (7.3 GW offshore), driven by delayed onshore projects becoming operational. Meanwhile, IRENA notes that offshore wind capacity is estimated to reach 520 GW by 2050 — buoyed by next-generation turbines offering longer blades and higher output. 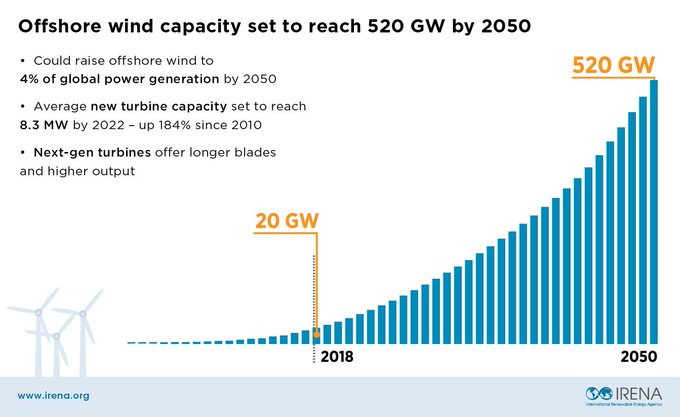 Although COVID-19 measures led to onshore construction activity slowing down from February to April of 2020, project developers and equipment manufacturers adopted to the “new normal” and accelerated construction activity in May.” The growth trend of offshore wind energy is impressive: From 2016 to 2017, it grew by about 25%. — installed capacity in the market grew and accounted for around 10% of total wind capacity additions per year. Compared with record 32% growth in 2017, offshore wind electricity generation increased only 20% in 2018.”

Here are the global leaders in Wind Energy (source):

In the U.S., the Wind sector emerged as the top provider of new utility-scale power generation in the nation in 2019, with 9.1 GW of large wind power projects coming online. In its 2019 Wind Powers America Annual Report 2019, the American Wind Energy Association (AWEA) noted that wind energy accounted for 39% of all new U.S. generation capacity last year.  In the first quarter of 2020, the industry put in over 1,800 megawatts (MW) of new capacity for wind power. Additionally, according to the new Wind Powers America First Quarter Report 2020, the volume of projects under construction set a new record. The AWEA’s 2020  American report indicated that U.S. project developers installed more than double the amount of wind capacity in the first three months of 2020 than in the first quarter of 2019. Per the Energy Department (source):

“Wind energy offers many advantages, which explains why it’s one of the fastest-growing energy sources in the world. Research efforts are aimed at addressing the challenges to greater use of wind energy. Read on to learn more about the benefits of wind power and some of the challenges it is working to overcome. 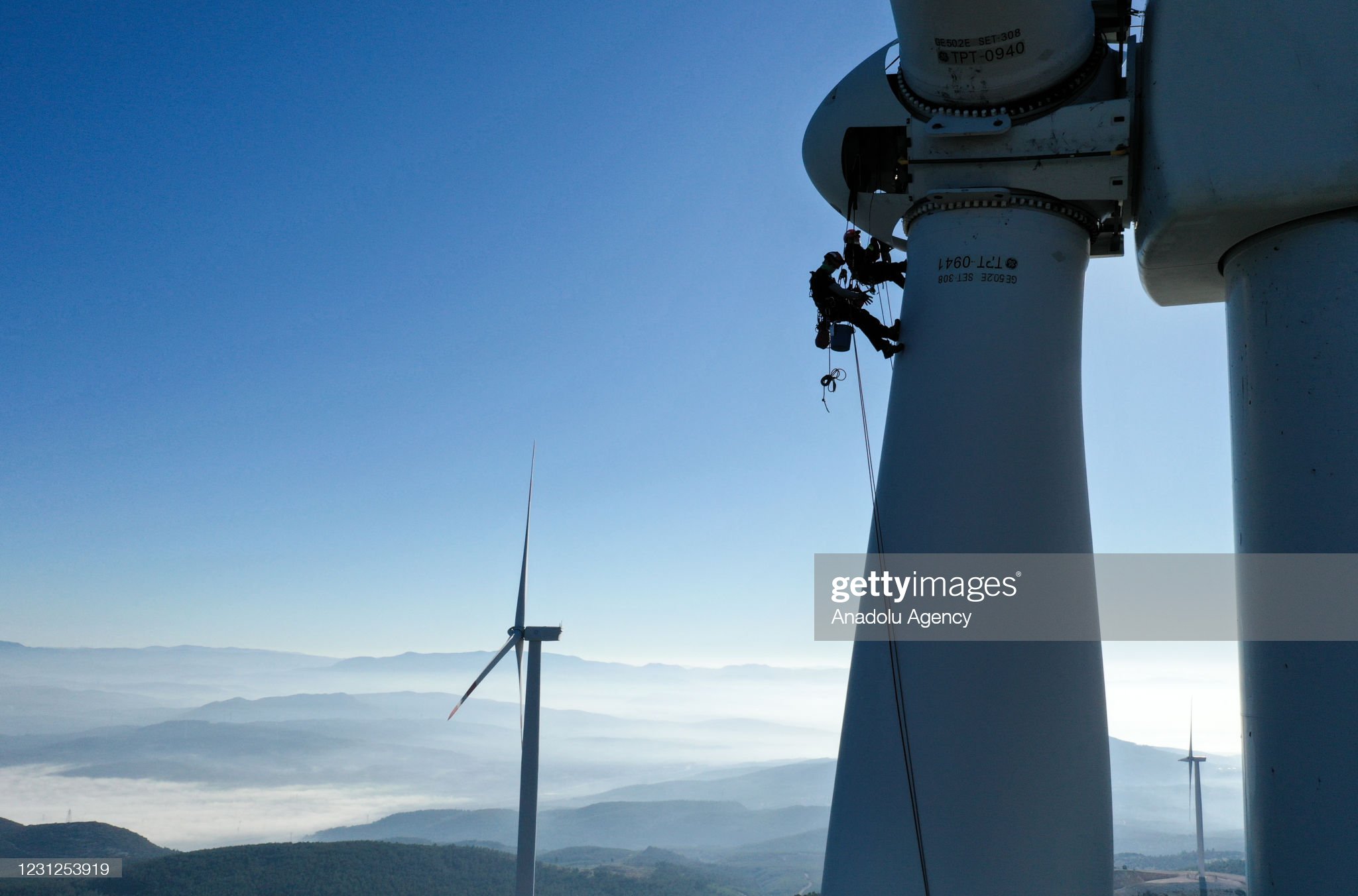 ZMIR, TURKEY – FEBRUARY 19: Rope access technicians carry out maintenance service on wind turbines including repairs, blade inspections and cleaning in Izmir, Turkey on February 19, 2021. In Turkey, where investments in renewable energy has increased, there are wind tribunes over 3,500. Turbines, where huge cranes and high platforms are used during the installation phase, require routine maintenance and repair work in certain periods. Technicians, who arrive at the wind park, stop the turbines to be maintained and repaired and the field mission of rope access technicians begins. The work of crews descending from a height of approximately 100 meters to perform maintenance and repair work take approximately 1 hour on each wing. (Photo by Mahmut Serdar Alakus/Anadolu Agency via Getty Images)