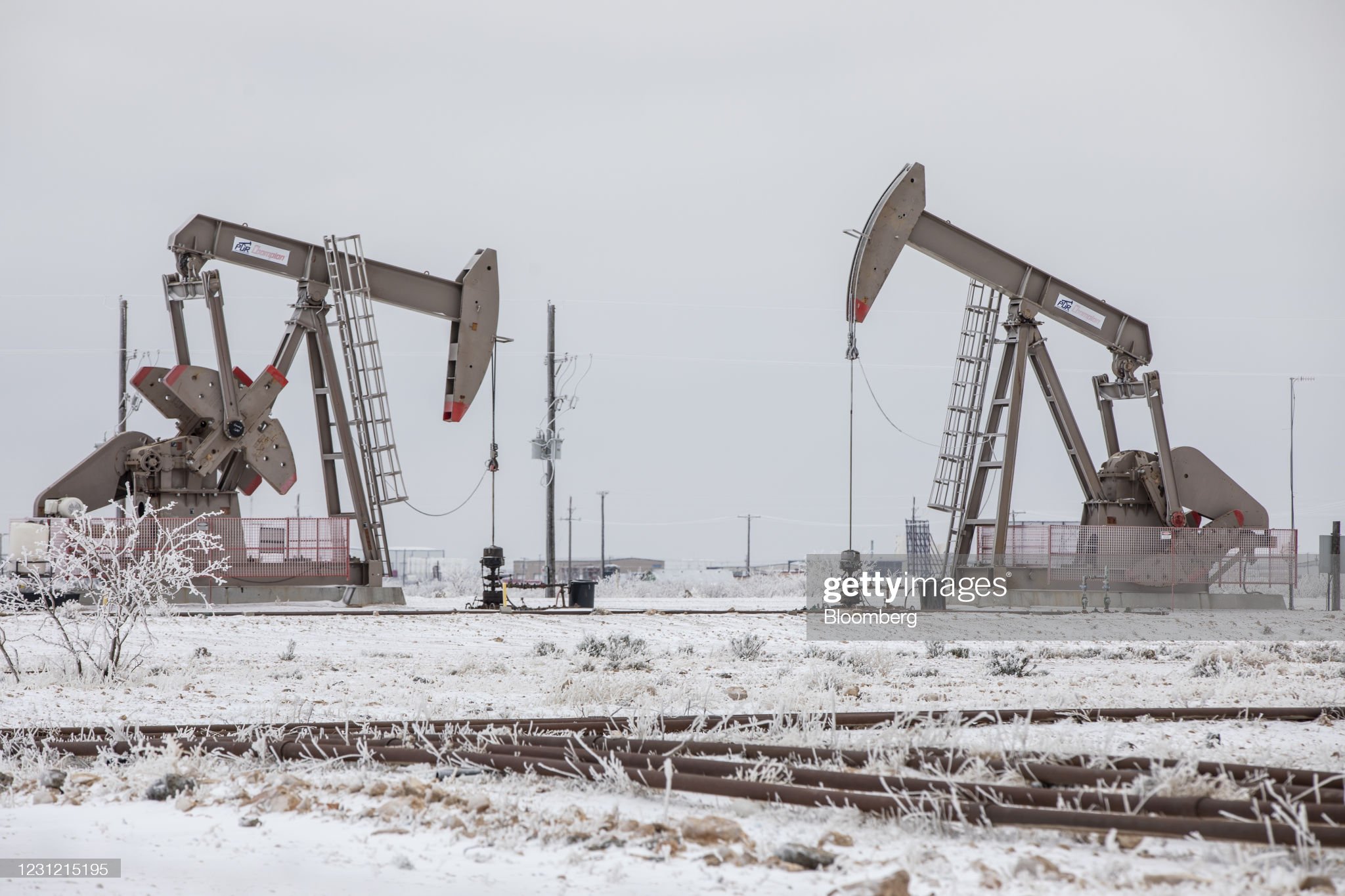 Pumpjacks operate in the snow in the Permian Basin in Midland, Texas, U.S, on Saturday, Feb. 13, 2021. The arctic freeze gripping the central U.S. is raising the specter of power outages in Texas and ratcheting up pressure on energy prices already trading at unprecedented levels. Photographer: Matthew Busch/Bloomberg via Getty Images

Why did the Texas Grid fail? For the last week, millions of Lone Star residents were forced to deal with a major power grid failure following a severe winter storm. As the BBC notes, “millions of people in the state, which rarely experiences such low temperatures, have been struggling to cope with the lack of power and frigid conditions.” The Texas energy grid, which is independent from the Eastern and Western Grids, was overwhelmed by the freezing weather and a surge in demand. ”

Although the Texas Governor Abbott falsely claimed that windmills were to blame, this is not true.  Here’s the truth: Texas relies on Fossil Fuels and approx. 50% of its electricity is generated from Natural Gas and 37% from Coal, most of which is imported from Wyoming. Despite the claim, wind is very small part of the equation. The Texas blackout crisis is the result of a dysfunctional grid system, poor infrastructure resilience (re: extreme climate change pressures), poor planning (limited Natural Gas supply) and poor leadership.

In fact, Texas faced the same issue during the 2011 winter storm but failed to learn the lessons such as weatherizing energy infrastructure — which proved to be the critical failure this time. In fact, during the 2011 winter storm, Texas saw single-digit temperatures and a total of 193 generating units faltered, leading to rolling blackouts affecting 3.2 million customers. The 2021 failure was a repeat but far worse and it should prompt a comprehensive review of ERCOT as well as political leadership at the state and local levels.

Here are excerpts and links to key articles:

What’s Happening In Texas With The State’s Power Grid

HANG: So I guess I just want to start with a basic question here. What exactly happened with the power grid in Texas?

WALSH: Right. So, basically, supply plummeted as demand surged. The operator of the state’s electric grid, ERCOT, says it saw a record demand on Sunday evening. And that was right as temperatures plunged and snow started to fall. That same night, power plants started going offline. They were knocked out by the weather. And that’s when these so-called rolling blackouts started. But for many Texans, the blackouts have not actually been rolling. They’ve been persistent. A lot of people have been without power since Sunday night. And no definitive timeline has really been laid out for when they can expect the heat and lights to come back. 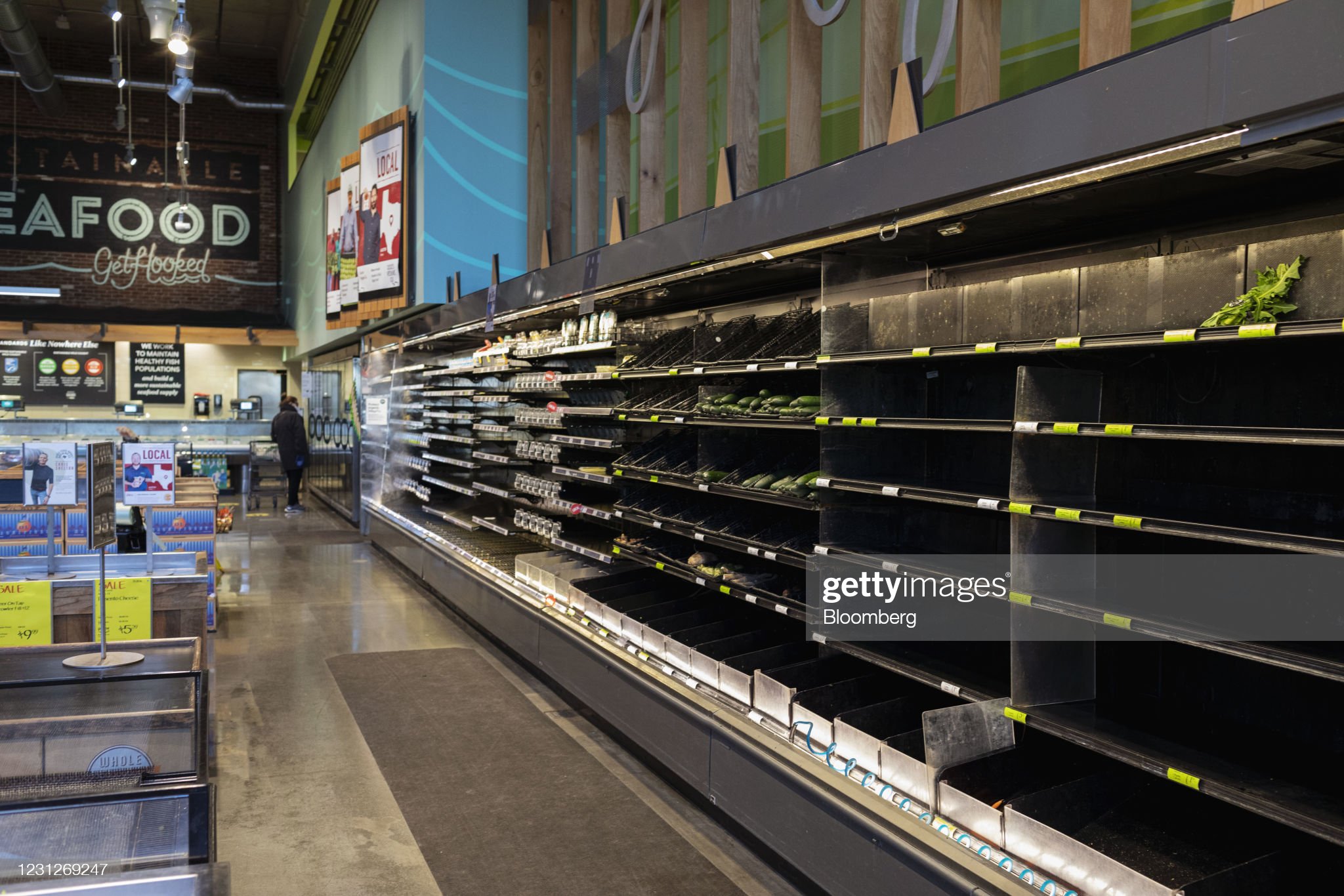 Nearly empty shelves in the produce section at a grocery store in Houston, Texas, U.S., on Wednesday, Feb. 19, 2021. The sprawling blackouts that plunged Texas into chaos in the midst of an historic cold blast are easing and energy prices are stabilizing but the impact its had on vital infrastructure is just being realized. Photographer: Zach Chambers/Bloomberg via Getty Images

Millions of Texans have gone days without power or heat in subfreezing temperatures brought on by snow and ice storms. Limited regulations on companies that generate power and a history of isolating Texas from federal oversight help explain the crisis, energy and policy experts told The Texas Tribune.

While Texas Republicans were quick to pounce on renewable energy and to blame frozen wind turbines, the natural gas, nuclear and coal plants that provide most of the state’s energy also struggled to operate during the storm. Officials with the Electric Reliability Council of Texas, the energy grid operator for most of the state, said that the state’s power system was simply no match for the deep freeze. 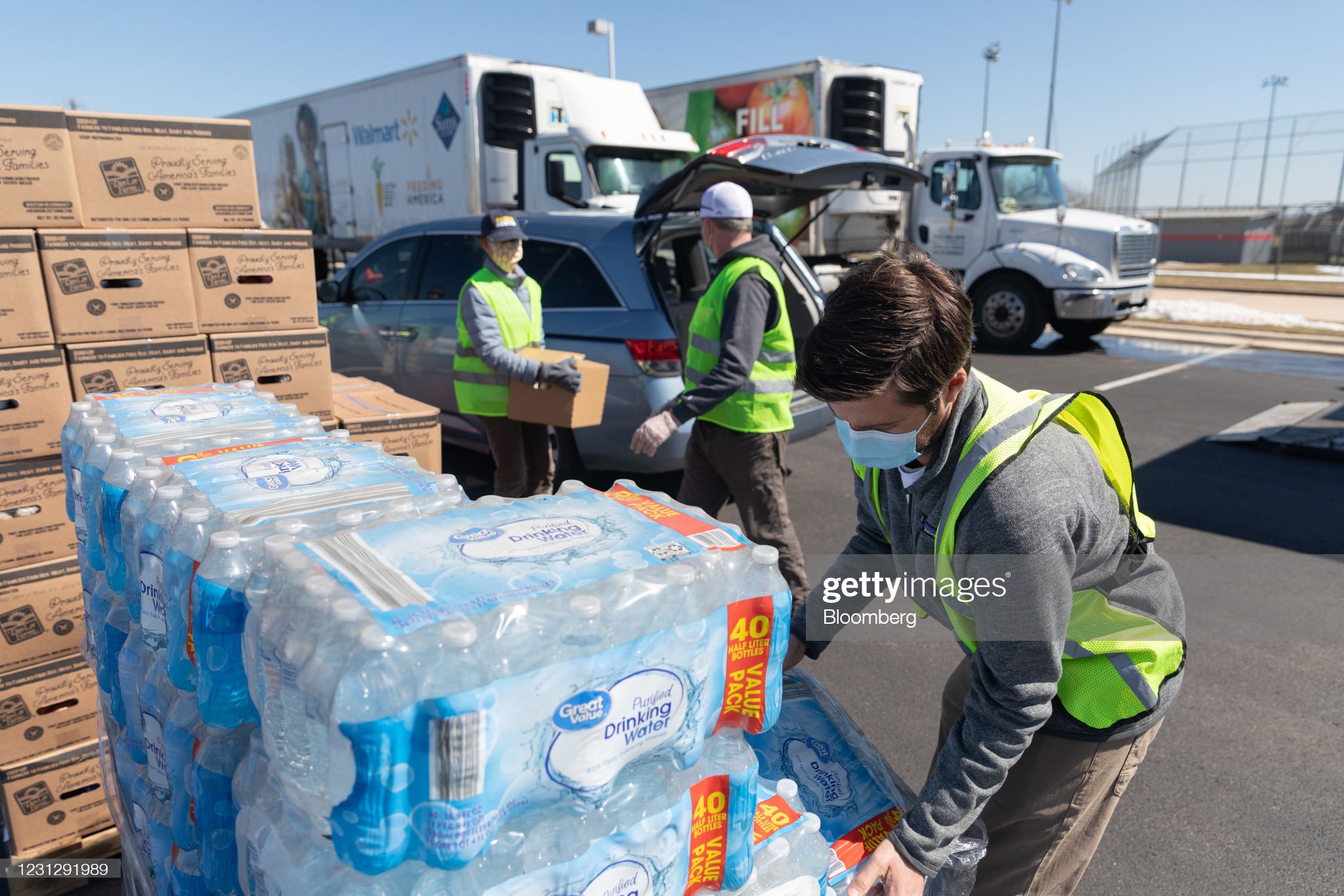 Texas Is Defined By Energy. How Did The State’s Power Grid Fail So Massively?

Millions of people in Texas have gone three or more days without power, water or both. Texas has had winter weather before, so what went so wrong this time?

Reporter Mose Buchele of NPR member station KUT in Austin explains why the state’s power grid buckled under demand in the storm. And Marshall Shepherd, director of the Atmospheric Sciences Program at the University of Georgia, explains the link between more extreme winter weather and climate change. 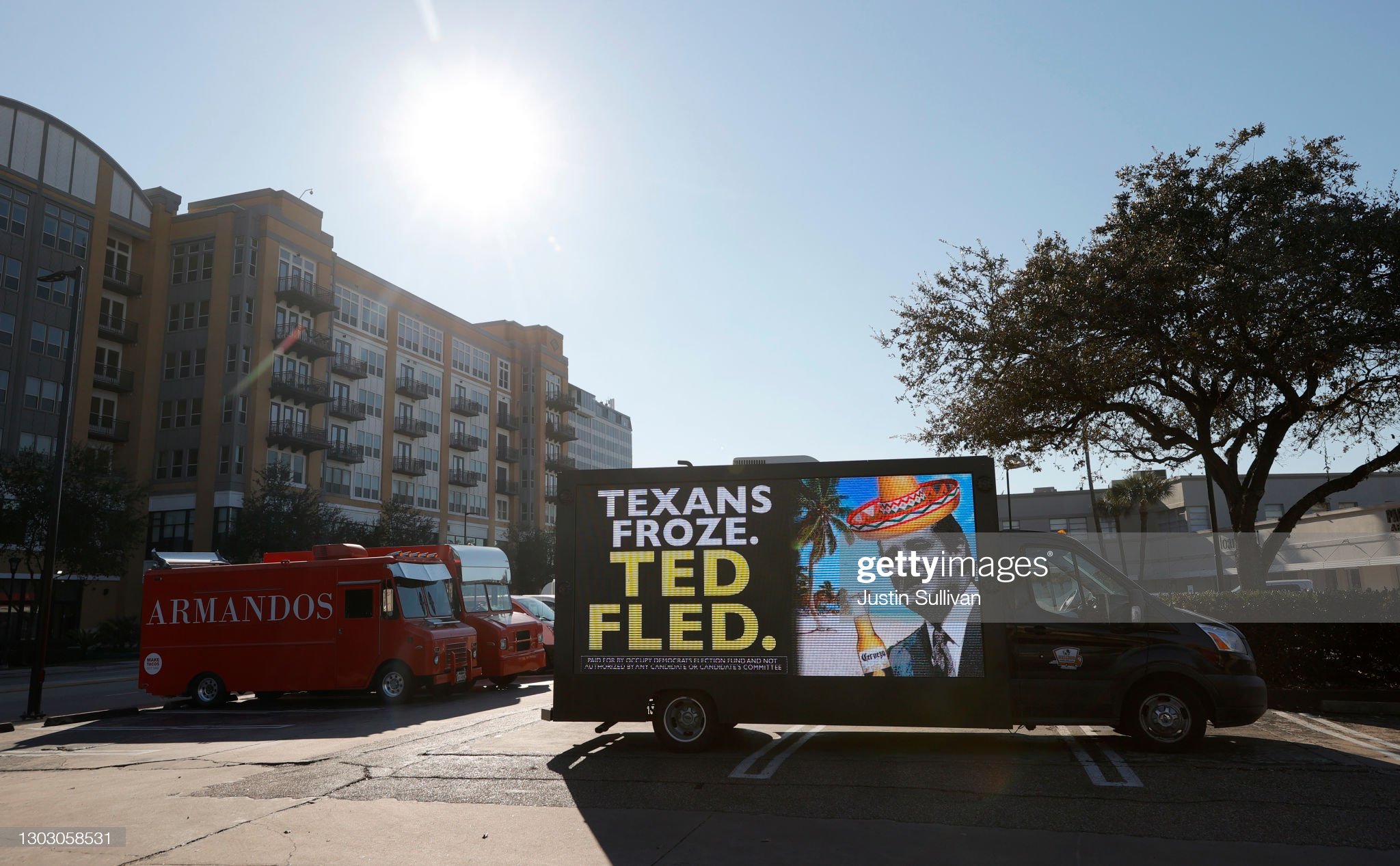 HOUSTON, TEXAS – FEBRUARY 19: A digital billboard truck with an image of U.S. Sen. Ted Cruz (R-TX) sits in a parking lot near Senator Cruz’s home on February 19, 2021 in Houston, Texas. Ted Cruz is facing criticism after he left Texas to go to Cancun, Mexico with his family during an unprecedented winter storm that brought freezing temperatures and widespread power outages throughout the state. (Photo by Justin Sullivan/Getty Images)

Texas was “seconds and minutes” away from catastrophic monthslong blackouts, officials say

Texas’ power grid was “seconds and minutes” away from a catastrophic failure that could have left Texans in the dark for months, officials with the entity that operates the grid said Thursday.

As millions of customers throughout the state begin to have power restored after days of massive blackouts, officials with the Electric Reliability Council of Texas, or ERCOT, which operates the power grid that covers most of the state, said Texas was dangerously close to a worst-case scenario: uncontrolled blackouts across the state.

The quick decision that grid operators made in the early hours of Monday morning to begin what was intended to be rolling blackouts — but lasted days for millions of Texans — occurred because operators were seeing warning signs that massive amounts of energy supply was dropping off the grid.

As natural gas fired plants, utility scale wind power and coal plants tripped offline due to the extreme cold brought by the winter storm, the amount of power supplied to the grid to be distributed across the state fell rapidly. At the same time, demand was increasing as consumers…. 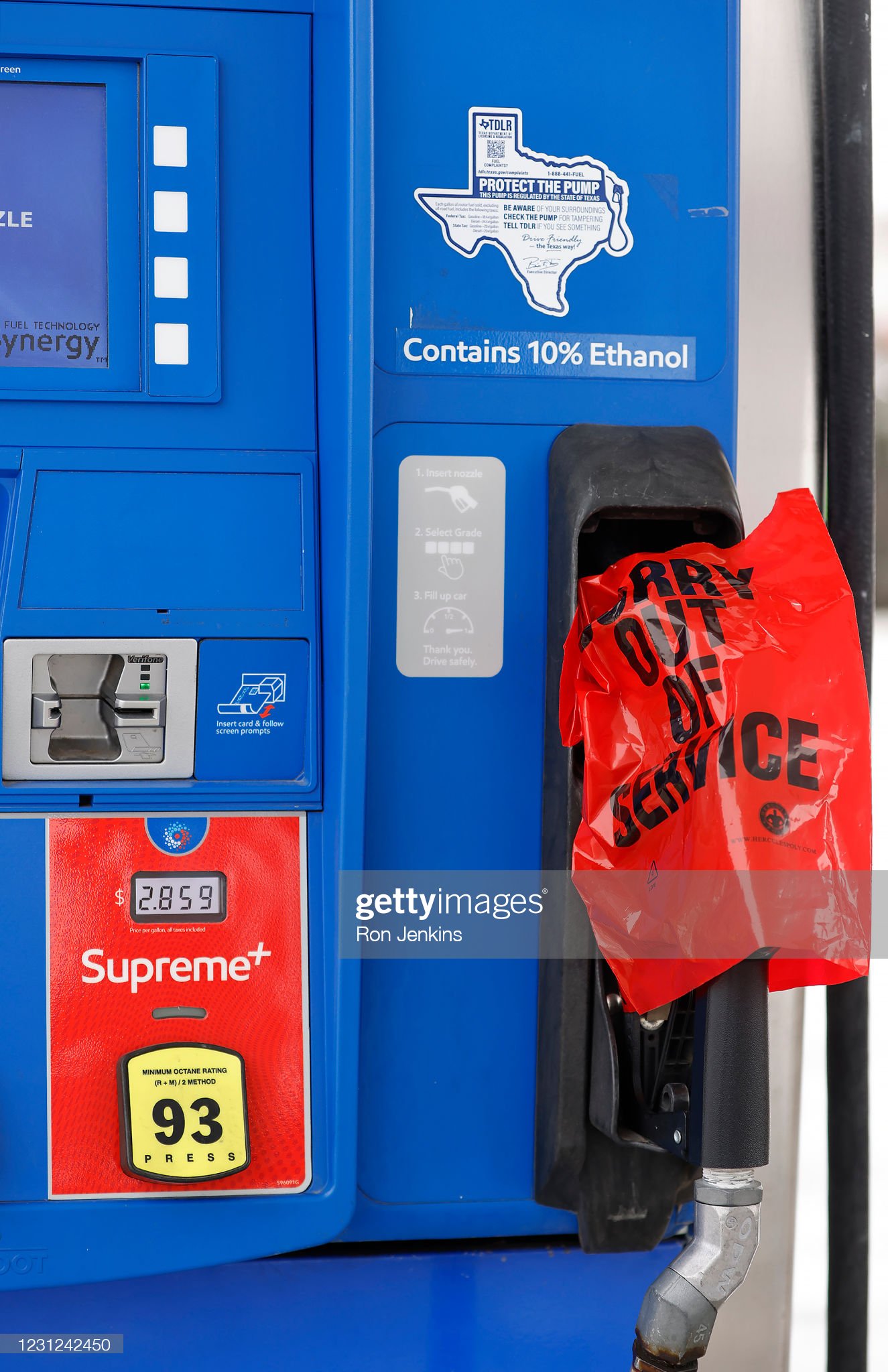 FORT WORTH, TX – FEBRUARY 18: Most gas stations are completely out of fuel after a snow storm on February 18, 2021 in Fort Worth, Texas. Winter storm Uri has brought historic cold weather and power outages to Texas. Residents have gone days without electricity and fresh water after a catastrophic failure of the power grid in the state. (Photo by Ron Jenkins/Getty Images)

All The Ways The Power Grid Failed In Texas

A bitter cold snap brought Texas to a standstill this week, severely disrupting the power grid and leaving millions in the dark and without heat.
At least 36 people have reportedly died due to the extreme winter weather across the central and southern U.S. so far; many died from carbon monoxide poisoning after improperly using cars and generators to stay warm.
A good portion of blame can rightly be assigned to Texas’ electricity grid. Unlike the rest of the continental U.S., Texas intentionally operates on its own, mostly isolated network.
Other compounding factors contributed as well, which together aligned to simultaneously increase power demand and decrease power supply, with deadly consequences.
Here’s a look at what went wrong…..
Wait, Texas has its own power grid?
Yes. While most of North America taps into either the Eastern Interconnection or the Western Interconnection for its power, the majority of Texas is serviced by the Electric Reliability Council of Texas, or ERCOT.
ERCOT’s service area doesn’t encompass all of Texas. El Paso, part of East Texas, and a portion of the upper Panhandle belong to other grids. Notably, those areas ― and other states in the central and southern U.S. ― didn’t have the type of cascading failures Texans experienced this week.
Though thousands in other states also lost power at the height of the crisis, Texas’ outages dwarfed the rest of the country, according to data tracked by PowerOutage.us.
The historical origins of ERCOT can be traced back to the nationwide manufacturing boom brought on by World War II and the corresponding need for increased power production.
At the time, there was no state oversight of Texas’ investor-owned utilities. Wanting to keep it that way, they assiduously avoided interstate power sales, even as the federal government encouraged systems to tie into one another as a matter of national defense.
(For a much more thorough primer on ERCOT’s history, see this explainer from Professor Julie Cohn, who studies energy, technology and the environment at Rice University and the University of Houston.)
Today, Texas politicians proudly tout the state’s power grid as being free from federal oversight. On Wednesday, former Texas governor and former national Energy Secretary Rick Perry encouraged the state’s residents to keep enduring blackouts and life-threatening cold so the grid can continue to operate independently.
“Texans would be without electricity for longer than three days to keep the federal government out of their business,” Perry said. “Try not to let whatever the crisis of the day is take your eye off of having a resilient grid that keeps America safe personally, economically, and strategically.”

Is that why Texas is in this mess?

Partially. If you’ve intentionally isolated your grid, by definition it’s going to harder to bring in more power in periods of need.
In the past, that hasn’t been an issue. Texas’ peak periods of demand typically happen in the summer, and ERCOT has historically been able to meet that demand.
But when demand far outstrips supply, as it did this week, sometimes you need to call in outside help. The state was forced to import power from Mexico in February 2011 when a similar cold snap hit and prompted rolling blackouts. That aid was unavailable during the crisis this week, however, because Texas’ natural gas shortage forced Mexico, which imports natural gas from across the border, to curtail its own energy production.
“One state over might be doing just fine where Texas could be struggling because there’s no way to move power between those two states,” Joshua Rhodes, a researcher at the Webber Energy Group at the University of Texas at Austin, told The Washington Post.

Damn near everything. Simply put, supply failed to keep up with demand. At the same time millions of Texans were cranking up their thermostats, leading to….

CONCLUSION: The Texas issues are unique but the overall issue of grid infrastructure is a critical one for the Biden administration to tackle. According to a report from the American Society of Civil Engineers, the U.S. earned a D+ on its infrastructure report card in 2017 (same as 2013). ASCE noted the following: ““Some parts of the U.S. electric grid predate the turn of the 20th century. Most T&D (transmission & distribution) lines were constructed in the 1950s and 1960s with a 50-year life expectancy, and were not originally engineered to meet today’s demand, nor severe weather events.”. The 2017 report card is accessible here.