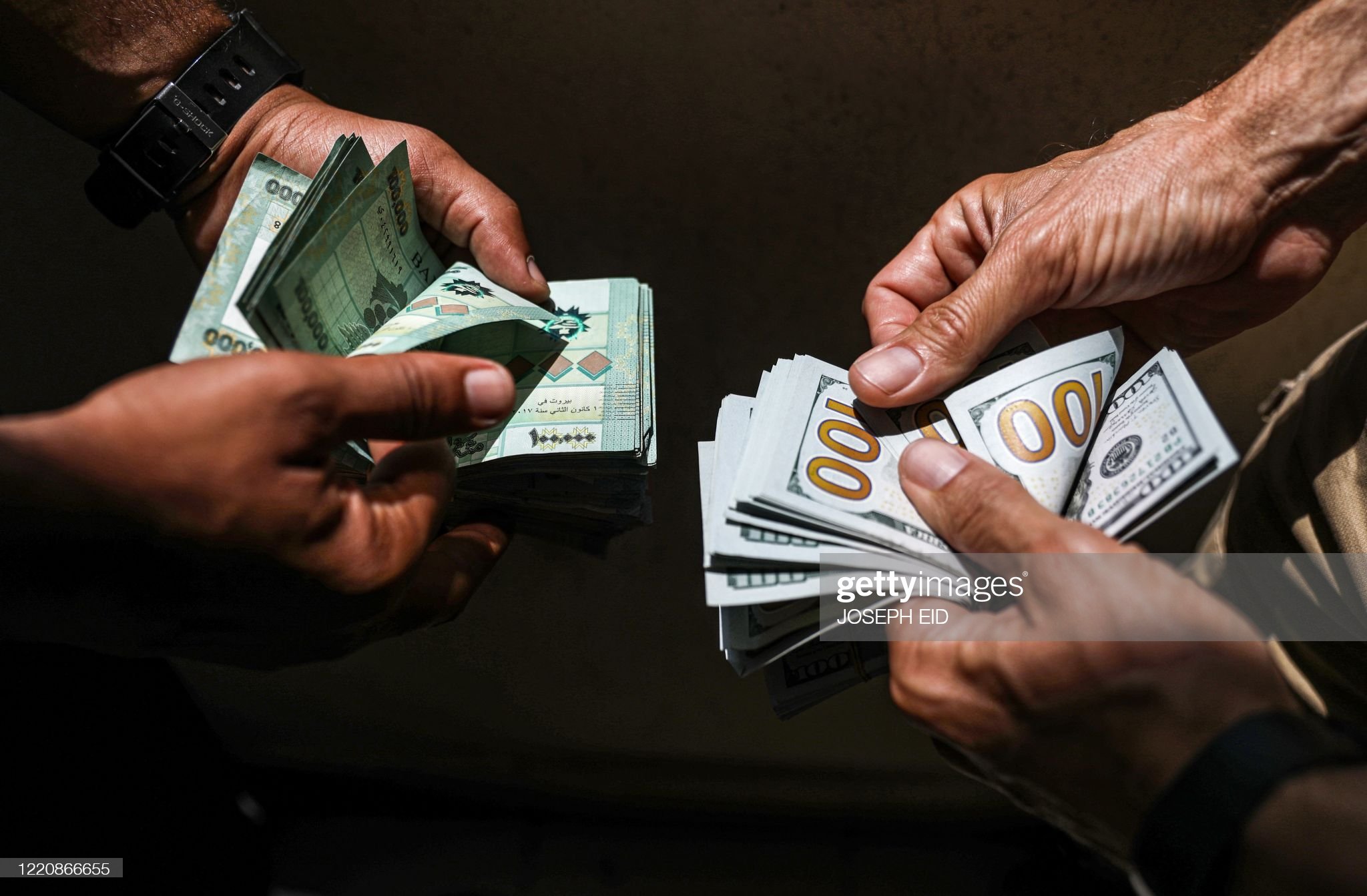 People exchange Lebanese pound and US dollar notes on the black market in Lebanon’s capital Beirut on June 18, 2020. (Photo by JOSEPH EID / AFP)

The current financial and economic crisis in Lebanon is grabbing the world’s attention. Lebanon has been sinking into a severe economic crisis since 2019. The country’s caretaker Prime Minister, Hassan Diab, appealed to the international community and the United Nations on July 6 to intervene and prevent unprecedented humanitarian catastrophe. This comes after the recent report by the World Bank Lebanon Economic Monitor (LEM) on June 1 that ranked the current crisis in the top ten, possibly top three, most sever crises globally since the mid-19th century.

In just two years, the local currency, the Lebanese pound, has lost about 90 percent of its value. Lebanon GDP decreased from $55 billion in 2018 to $33 billion in 2020, about 40 percent decrease. Furthermore, the real GDP is expected to contract by 9.5 percent in 2021. More than half of the population is likely under the national poverty line (World Bank Report). How the Switzerland of the Middle East reached to this situation?

Since the 1950s, Lebanon’s economy has been driven by revenues from two main sectors, banking and tourism. These two sectors require safety and stability. The different administrations did not provide the suitable environment to meet these two requirements and were unsuccessful in their attempts to diversify the economy.

Lebanon’s banking system prospered due to the banking secrecy law that was enacted in 1956 along with a prudent regulatory framework set by the Central Bank. This has attracted capital from some Oil-rich Arab nations and other countries. However, the civil war in neighboring country Syria that impacted many of the Lebanese investments and took in over a million Syrian refugees placed  financial pressures on the banking sector in Lebanon. In October 2019, foreign investors started withdrawing their money from Lebanese banks limiting the banks’ ability to lend the Lebanese economy, leading to a recession. Moreover, the government investments did not increase the country’s exports rather they increased the country dependence on imports to fulfill the citizens’ needs. As a result of these circumstances and decisions, Lebanon’s currency devalued and defaulted on a Eurobond in March 2021 for the first time ever, and its debt-to-GDP estimated to have reached 174% by the end of 2020.

Tourism is the second source of revenue for Lebanon. On average, 2 million visitors per year come to Lebanon mainly from the Arab Gulf States, USA, Europe, Canada, and Australia. The COVID-19 pandemic and the huge explosion in the Beirut port nearly a year ago damaged the capital and made what was already a bad situation much worse. As most governments did, the Lebanese government locked down the country, and this accelerated the economy collapse as many businesses closed and the unemployment rate skyrocketed. The unemployment rate rose from 28 percent in February (pre-COVID) to nearly 40 percent in Nov-Dec.

Most economists believe the problem in Lebanon is not only an economic problem but also a political problem. Lebanon’s confessional political system where political positions are reserved for representatives of the different religious groups makes addressing this crisis challenging since people vote for their religious group rather than the party that has their economic interest. Dr. Jacques Neriah suggested for this crisis “The powers of the current Lebanese government and president should be commandeered and replaced with the power vested in a U.N. Security Council resolution for a High Commissioner to rule Lebanon for a set period. This will allow the establishment of a different technocratic government and system of governance and enable the world community to extend economic and financial assistance.”