Why are Indian Farmers Protesting? What You Need to Know
By admin February 5, 2021 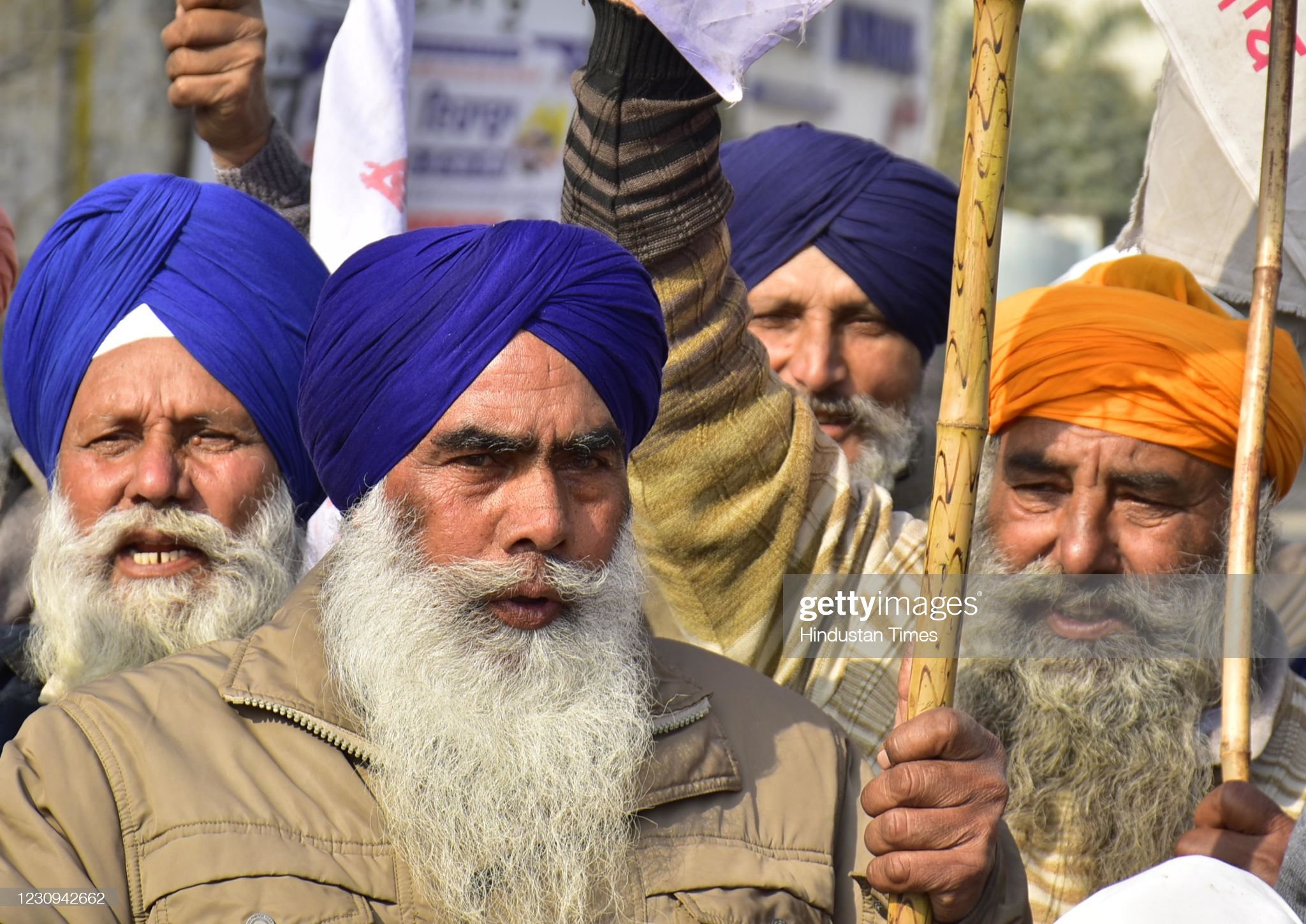 Why are Indian farmers protesting? For the last few months (since September, 2019), farmers all across India have engaged in mass protests. As the New York Times notes: “More than 60 percent of India’s 1.3 billion people still depend primarily on agriculture for their livelihood, though the sector accounts for only about 15 percent of the country’s economic output. Their reliance has only increased after the coronavirus pandemic badly struck the urban economy and sent millions of laborers back to their villages. For years, debts and bankruptcies have been driving farmers to high rates of suicide.” Per Euronews: “[The] Indian agriculture acts of 2020’, referred to as Farm Bills, are three acts initiated by the Parliament of India in September last year. Ever since they were approved, mass outrage has been sparked across the country, coming mainly from those in the agricultural sector. Protestors claim the new laws are “anti-farmer” and put farmers at the “mercy of corporates”, alleging that it will hurt their incomes. Agriculture is the largest source of livelihood for most Indians, employing more than half the country’s workforce.”

Here are some key articles.

Why Are Farmers Protesting in India?

Thousands of protesters, many driving tractors, took to the streets of New Delhi on Tuesday. Who are they, and what do they want?

At least one protester was killed and 300 police officers were injured after tens of thousands of farmers, many driving tractors, took to the streets of New Delhi on Tuesday to call for the repeal of contentious new agriculture laws.

After months of sustained but peaceful demonstrations on the city’s outskirts, the farmers upstaged the city’s national Republic Day holiday, clashing with the police, destroying barricades and storming the Red Fort, a 400-year-old landmark. In addition to the police officers, many protesters were injured as well.

On Wednesday, the day after the chaos, the farmers returned to their camps on the city’s edge, pledging to continue their movement but canceling plans for a march on foot to India’s Parliament that had been set for Monday.

Who are the protesters?

Many of the protesting farmers are members of the Sikh religious minority and come from the states of Punjab and Haryana. Farmers in other parts of the country have held rallies in solidarity.

Since November, thousands of farmers have encamped outside New Delhi, the capital, keeping vigil in sprawling tent cities and threatening to enter if the farm laws were not repealed.

The protest has laid bare the dire reality of inequality across much of the country.

More than 60 percent of India’s 1.3 billion people still depend primarily on agriculture for their livelihood, though the sector accounts for only about 15 percent of the country’s economic output. Their reliance has only increased after the coronavirus pandemic badly struck the urban economy and sent millions of laborers back to their villages. For years, debts and bankruptcies have been driving farmers to high rates of suicide.

Farmers’ protest: Why did a Rihanna tweet prompt Indian backlash

Hours after a tweet by pop superstar Rihanna drew global attention to the cause of protesting farmers, India launched an unprecedented backlash against the Barbadian singer.

The ministry of external affairs released a statement criticising “celebrities and others” for their “neither accurate nor responsible” comments, and top ministers and celebrities tweeted against “propaganda” that threatened India’s unity.

Tens of thousands of farmers have been protesting on the borders of the capital Delhi for more than two months against new laws that will loosen the rules around the sale, pricing and storage of agricultural produce.

Rihanna’s tweet on Tuesday linked to a news story about the internet blockade at the protest sites and soon went viral, gaining more than 700,000 likes. “Why aren’t we talking about this?!” wrote the singer, who has 100 million followers on the social network.

The government pushback was swift, led by Home Minister….

Wading into a sensitive issue for Indian Prime Minister Narendra Modi, the U.S. embassy in New Delhi on Thursday urged his government to resume talks with farmers angry over agricultural reforms that sparked a months-long protest campaign.

Largely restricted to the outskirts of New Delhi, the mostly peaceful protests were marred by violence on Jan 26., when some protesters entered the heart of the capital city after the Republic Day military parade and clashed with police.

Television images broadcast internationally of protesters occupying the ramparts of New Delhi’s historic Red Fort and later clashing with police raised awareness of the confrontation between Modi’s government and the farmers.

“We encourage that any differences between the parties be resolved through dialogue,” a U.S. embassy spokesperson said in a statement that also proffered general support to government measures to “improve the efficiency of India’s markets and attract greater private sector investment.”

What are Indian Farmers Protesting and how is Rihanna Involved?

Activists, popstars and public figures have taken to Twitter in support of ongoing strikes by farmers in India.

Barbadian singer Rihanna shared an article to her more than 100 million followers on Tuesday, sparking others to speak out on the issue too.

In a matter of hours, climate activist Greta Thunberg had shown her support, along with Ugandan activist Vanessa Nakate and the US vice president’s niece Meena Harris.

But what did the Indian government have to say?

India’s external affairs ministry responded to the call to action, accusing the singer of being “sensationalist”. It claimed that “reformist legislation” had now been passed and criticised her for causing a social media storm.

“The temptation of sensationalist social media hashtags and comments, especially when resorted to by celebrities and others, is neither accurate nor responsible.”

What’s Going on in India:

The ‘Indian agriculture acts of 2020’, referred to as Farm Bills, are three acts initiated by the Parliament of India in September last year. Ever since they were approved, mass outrage has been sparked across the country, coming mainly from those in the agricultural sector.

Protestors claim the new laws are “anti-farmer” and put farmers at the “mercy of corporates”, alleging that it will hurt their incomes. Agriculture is the largest source of livelihood for most Indians, employing more than half the country’s workforce.

It’s been called the world’s largest organised strike in human history. In November, protesters were being struck with water cannons and tear gas shells by the police forces, throwing stones themselves and tossing barricades into the river.

By December, tens of thousands marched in the capital city of New Delhi, with over 250 million people from around the subcontinent participating in a 24-hour strike in solidarity. This culminated in a…

Farmers and agricultural unions are demanding the immediate repeal of three new laws passed in September.

Well into their sixth straight month of striking and protesting, farmers in India continue to demand the repeal of three recently passed agricultural bills that they believe prioritize corporate interests over their own. The protests began in August when the three bills were first unveiled and have continued to grow exponentially as the bills were passed in September. The government has repeatedly refused to grant the demands of farmers and agricultural unions in subsequent meetings.

The protest, at its core, reflects global issues of workers’ rights and labor regulations and the Indian government’s treatment of the protestors has begun to veer dangerously into human rights violation territory, but it still has not been covered widely outside of India (even as people around the world have hosted their own protests in solidarity). That changed, however, when the peaceful protests turned violent at the end of January. On Jan. 26, India’s Republic Day, farmers hosting a planned rally drove their tractors into Delhi’s city center and stormed the capital’s historic Red Fort, where they clashed with police armed with tear gas, batons, and assault rifles. According to the BBC, one protestor died and more than 300 police officers were injured in the clash; more than 200 protestors were subsequently detained, as were eight working journalists, per Human Rights Watch.

In early February, after the Indian government was reported to be restricting internet access in the areas around the ongoing protests, global activists like Rihanna began using their platforms to signal-boost the farmers’ cause.

As the protest nears the six-month mark, the government shows no sign of accepting the protestors’ demands and therefore has all but ensured their continued civil disobedience. Here’s a primer on the ongoing conflict.

What sparked the farmers’ protest?

The farmers’ protest is centered around conflict over three pieces of agricultural legislation passed in September by India’s Parliament with support from Prime Minister Narendra Modi. According to PRS, a nonprofit Indian legislative research institute, the three bills decrease trade regulations on farmers’ goods, allow for online and interstate trading, enable farmers and buyers to enact exclusive contracts, and limit the government’s ability to regulate the supply of essential commodities.

The bills were presented by Modi and other legislative supporters as giving farmers more freedom to control their own trade and expand their own markets. The farmers, however, argue that the increased competition enabled by this deregulation will give corporate buyers, rather than agricultural workers—who make up nearly 60 percent of India’s population—all the power. Since the buyers will have access to a wider pool of suppliers, they’ll therefore be able to…

EDITOR’S NOTE: TBG maintains a global network of over 500 experts in more than 150 countries. For more information on TBG’s consulting services, including Asia/Southeast Asia-focused consulting and case studies just send an email.